This post departs from our usual discussion of contract terms and talks about redlining and redlining software. A redline (sometimes called a “blackline”) provides a quick and easy view of the differences between a new contract draft and an old one. Usually, redlining software underlines added terms and strikes through (crosses out) deleted terms, but leaves the deleted terms legible. Redlining isn’t difficult, but doing it wrong can delay negotiations and even lead you to sign terms you didn’t mean to accept. 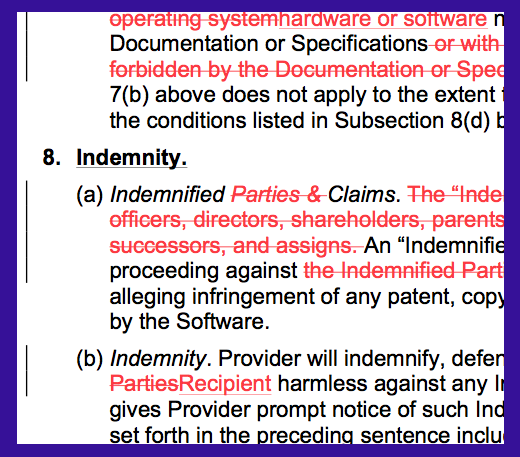 Almost everyone uses MS Word (there’s a monopoly for you), so I’m going to address Microsoft’s redlining system. In the newer versions of Word for the PC, you redline via the “Compare” button on the Review tab. In older versions and in Word for the Mac, you hit “Merge Documents” on the Tools menu. In older Word, it’s sometimes hard to figure out which doc the software will treat as the original and which as the revised version. Just look carefully and make sure the terms of the newer version appear as additions and deletions on top of the older one.